It is the story of a love at first sight. An encounter with nature, landscape, the warm spring morning sun veiled by a timid mist nearby the hills of Camaiore.

It is the view from the window of a country house immersed in olive groves where by magic the clear bell sound of a sheep flock are heard. What appears in front of the eyes of a beautiful and blonde American tourist seems one of the paintings by Tista Meschi or Alceste Campriani, the two most significant Lucchese landscape artists of the twentieth century, who with a touch of their brush, described with a variety of details and colors their unique landscape: a strip of Tuscany, a glimpse of the hills of Lucca overlooking the sea.

Twenty years have passed since Karen Wilberding rented the house on the hills of Montebello in Camaiore. There, by magic, she felt transported to a place that she thought did not exist. An ancient past where time had stopped. She was fascinated by the flock of sheep and by the shepherd who with his stick or whistle ordered the dog to direct the sheep to the pasture. So she began to create small paintings where the sheep were always present as seen through the perspective of the windows of the house.

Twenty years have flown by from that beautiful encounter with an ancient world, but new one for the eyes of the young American. A period of time that allowed her to deepen her knowledge of the city of Lucca and its hills, to study its history and people. A journey that has made her appreciate the simplicity and genuineness of the local people and the knowledge of the countryside still genuine as those who live there.

For several years now she has moved to the Lucca side of the hills a few kilometers from the city center, where she brought back to its ancient splendor an old farmhouse set among the centuries-old olive trees and the woods that provide different and wonderful colors in each season. In this “eden”, Karen has her Italian studio. A beautiful but spartan environment, unique and simple, like the countryside that surrounds it.

The artist, through her paintings and sculptures, deepens her ties with the Lucca area and she has become one of its most important ambassadors in the United States and in the world.

Her life and her work is divided between the studio in Lucca and those in New York and San Francisco. The first phase of her work is always in Lucca. The ideas are born here and the images are developed in her mind. She draws her sketches for the sculptures and she starts the paintings in this studio. The second phase develops on the other side of the Atlantic ocean. Once she has returned to America, she looks back at her life in Lucca, at the trees and the sheep with a sense of longing and nostalgia. She re-elaborates her work through her desire to go back to those places. The sculptures are made in the Artworks Foundry in Berkley, California, while the paintings are retouched, renovated in San Francisco.

For over twenty years, Karen has spent her summers in Lucca. It’s among those hills that she draws her inspiration. Tuscany has changed her lifestyle and her conception of time. She has been enriched not only on an artistic and cultural level but also on a personal one. She has aways been passionate about the great Renaissance painters, the musical work of Puccini and the Tuscan literature and for this reason she often associates the natural element with a text in her paintings: a word or a landscape of Dante’s Comedy or an Italian musical term (eg Silente, Adagio) 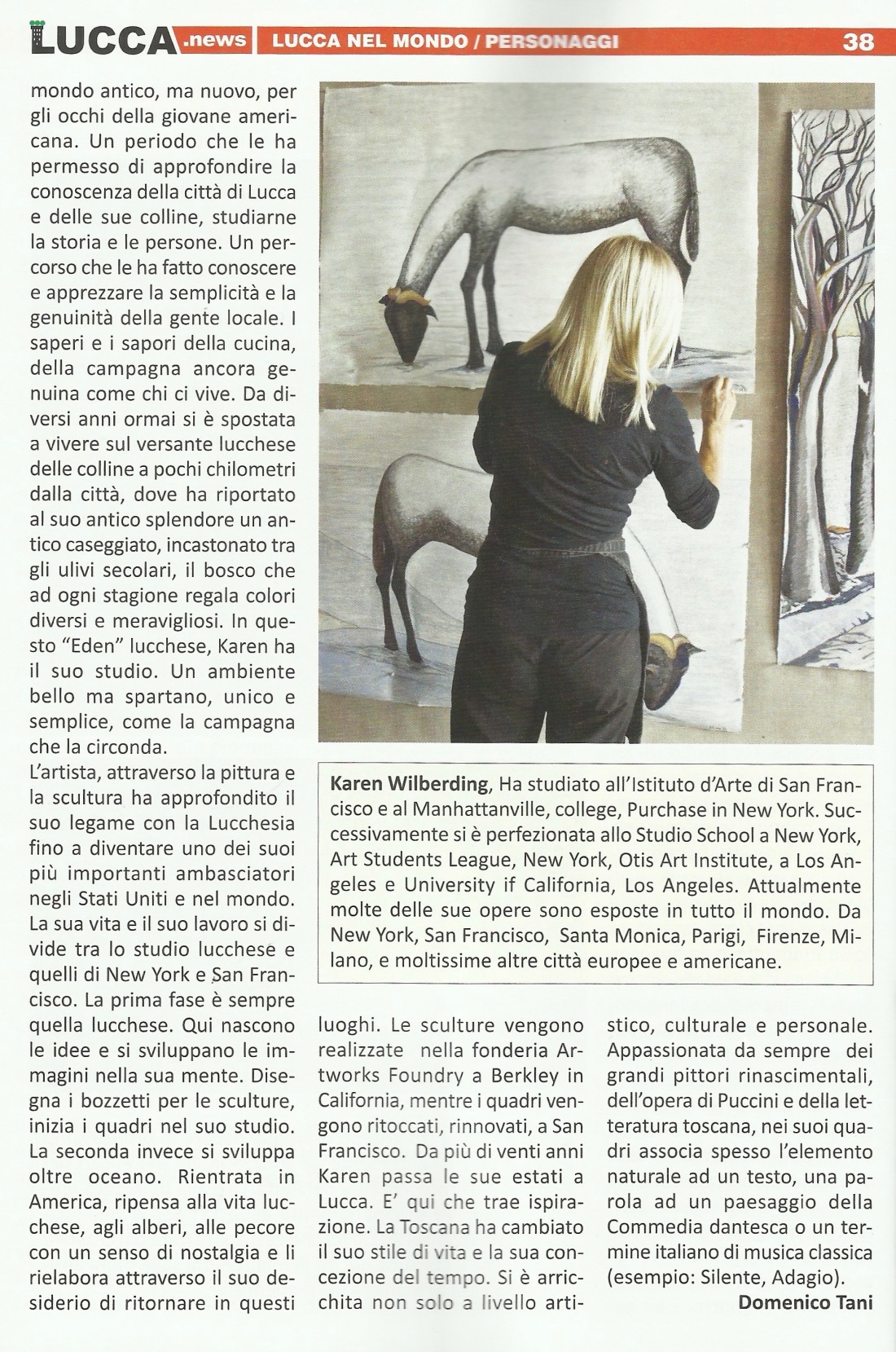